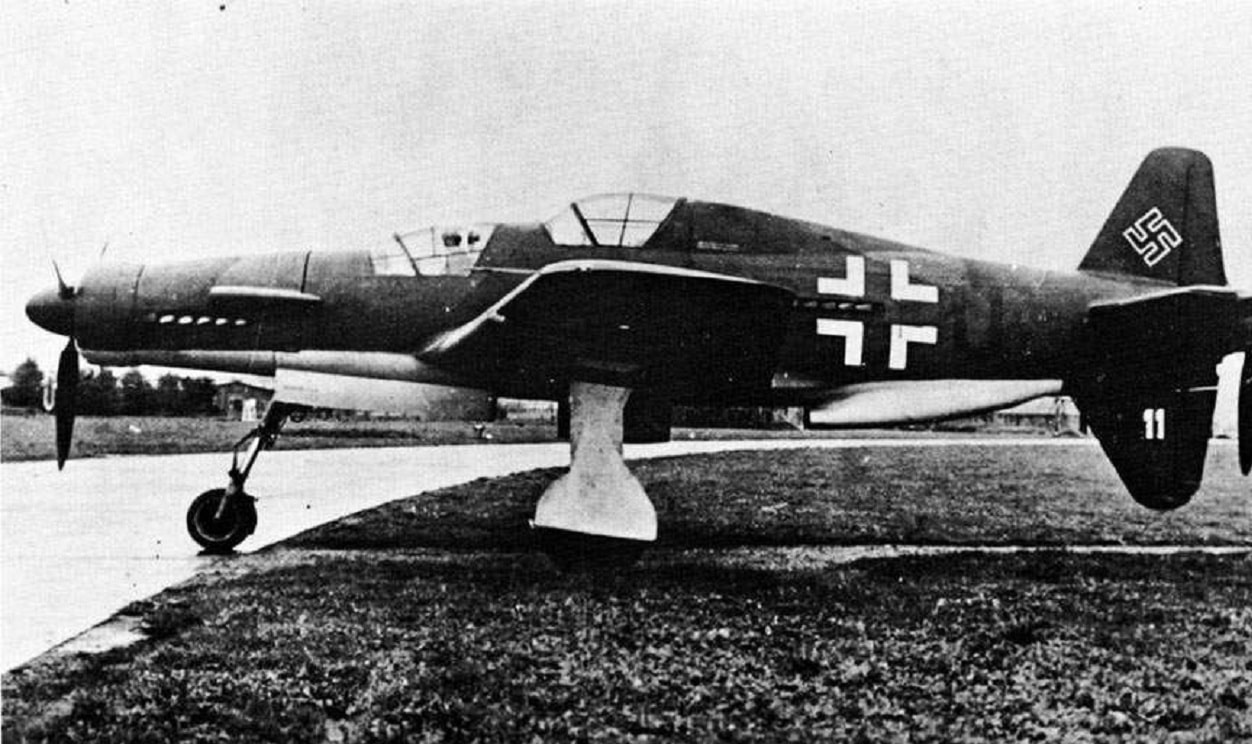 Dornier Do 335,  A 2 Minute History: During World War II, Nazi Germany built and designed a wide array of airplanes to aid their war effort — especially during the waning days of the war, a number of novel designs — including the world’s first successful jet engine fighter jet — made their debut with the Luftwaffe. And although not jet-powered, one of Germany’s more novel designs was the Dornier Do 335 fighter-bomber airplane.

Some of the most famous fighters of World War Two followed fairly conventional design principles: fairly clean lines and smooth fuselage built around a single, powerful engine attempted to squeeze as much speed as possible out of a tried and trusted design.

So how could a second engine be mated to an airframe while keeping drag to a minimum? By mounting it the rear of the airframe of course.

The Dornier Do 335 was indeed a strange sight to behold. Like most conventional airplanes, it had a single-engine and propeller assembly built into the fuselage nose — as well as a second engine and propeller at the rear in a “puller-pusher” type configuration. This design choice gave the Dornier Do 335 the thrust of a dual-engine heavy fighter, and a drag penalty similar to a single-engined fighter.

With both engines sitting on the airframe’s centerline, the Dornier Do 335 also benefitted from a better roll rate than planes outfitted with wing-mounted engines. Furthermore, if one of the Dornier Do 335’s engines failed or was destroyed during combat, the plane would handle similarly, as thrust would remain symmetrical.

Wartime evaluations proved that despite the airplane’s unusual appearance, it handled well and exhibited the benefits in speed and handling that were expected by its pusher-puller engine configuration. Test pilots reportedly praised the airplane’s reliability.

Not Many Were Made

In response to increasingly successful Allied bombing raids on German manufacturing targets, the Luftwaffe instituted the Jägernotprogramm, or Emergency Fighter Program, prioritizing a dizzying array of new and radical fighter designs in a last-ditch effort to protect the German Reich. While the Dornier Do 335 was one of the fighter designs given manufacturing priority under the Jägernotprogramm, Dornier built only around 40 airframes in total, thanks to the increasingly difficult manufacturing situation in Germany. Nazi Germany’s eventual defeat stopped the Dornier Do 335’s production, as well as virtually all production throughout the country.

Caleb Larson is a Defense Writer based in Europe. He holds a Master of Public Policy and covers U.S. and Russian security, European defense issues, and German politics and culture.