Don’t Panic, but Russia Is Training Its Robot Tanks to Understand Human Speech 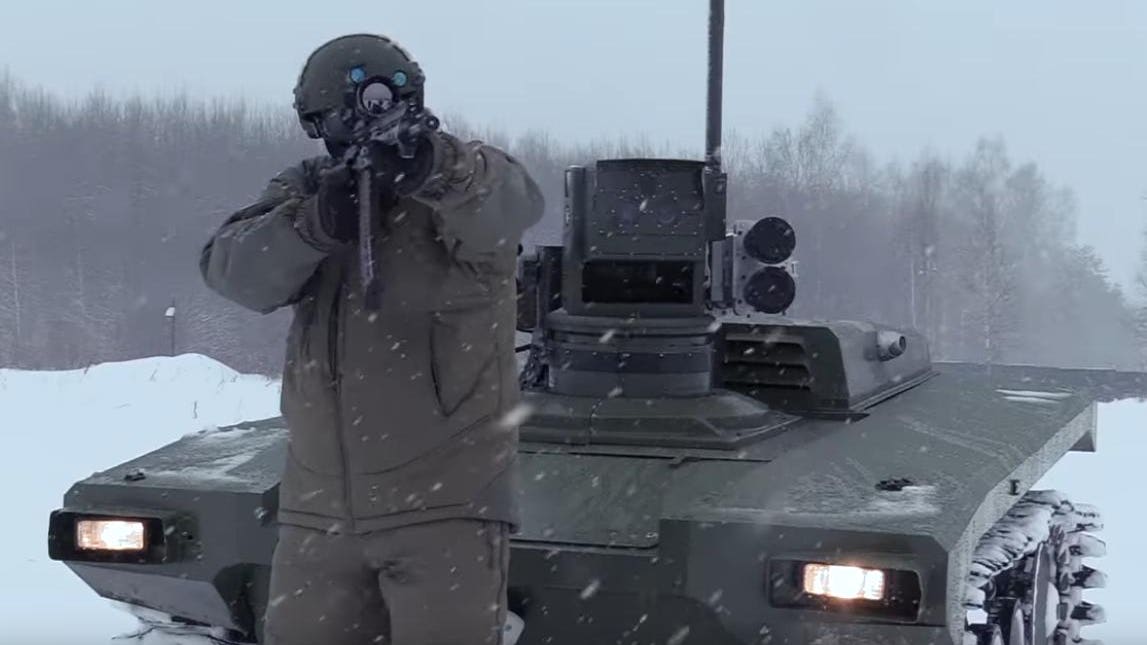 A soldier and a Marker UGV.

Russian scientists are teaching a robotic tank to understand spoken orders from a human commander.

As originally designed, the tracked Marker followed instructions that a human operator tapped into a computer tablet. “Then we tried the voice-control technology, when a commander gives orders to both his subordinates and the robots,” Oleg Martyanov, an ARF manager, told TASS. “We are developing it now.”

After a long delay, Russia finally is speeding ahead with developing sophisticated, combat-capable air and ground robots. The air force’s Hunter-B stealth drone flew for the first time in August 2019. The Russian army in May 2018 deployed at least one Uran-9 armed ground robot to Syria for combat trials.

But Uran-9 didn’t quite work as its designers intended. After just a month of combat, the Kremlin admitted the unmanned ground vehicle wasn’t ready for regular front-line use.

“Modern Russian combat unmanned ground vehicles are not able to perform the assigned tasks in the classical types of combat operations,” senior research officer Andrei Anisimov said at a conference at the Kuznetsov Naval Academy in St. Petersburg.

Beside being incapable of handling “assigned tasks in the classical types of combat operations,” the radio-controlled Uran-9’s “thermal and electro-optical sensors proved incapable of spotting enemies beyond 1.25 miles,” according to BAE.

“Sensors, and the weapons they guided, were useless while the Uran-9 was moving due to a lack of stabilization,” the British company added. “When commands were issued, there were significant delays.” Uran-9 also is “vulnerable” to radio jamming, which can result in “loss of communications/control.”

Uran-9 possesses only “limited autonomous capabilities,” according to BAE. The 12-ton UGV has “some limited ability to detect, identify and engage enemy forces without manual human interaction.”

ARF’s work on Marker could help to improve the reliability and autonomy of front-line UGVs such as Uran-9. The tank-size Marker seemingly borrows the chassis of an existing manned armored vehicle and thus might be simpler and tougher than the smaller, custom-designed Uran-9 is.

The near-term goal is for robots to complement, but not replace, human soldiers in Russia’s ground divisions. A UGV would be “an assistant in all functions needed at the moment—combat, [surveillance], logistics, evac or other functions,” said Samuel Bendett, an analyst with the Center for Naval Analyses and the Center for a New American Security.

ARF’s experiments with human-to-robot voice commands isn’t necessarily indicative of the state of the art in Russian robotics. The Kremlin might want its combat ‘bots to be sufficiently autonomous as to require very little human direction. The Marker trials are “by no means the final determinant of where Russian combat autonomy is at the moment,” Bendett said.