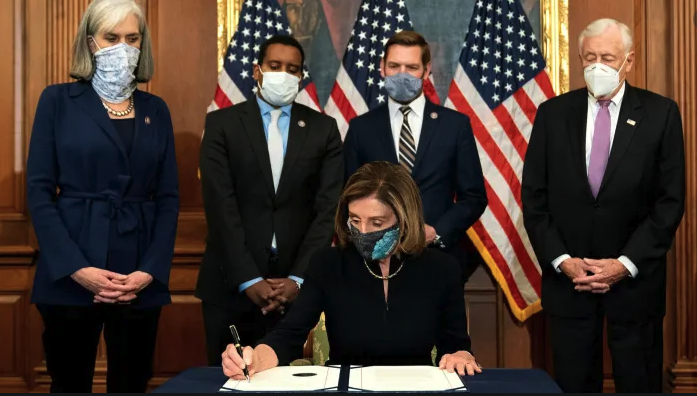 On this Washington Roundtable episode of the Defense & Aerospace Report Podcast, sponsored by Bell, our guests in segment one are Michael Bayer, former chairman of the Defense Business Board and the president of the Dumbarton Strategies consultancy, and Arnold Punaro, the chairman of the National Defense Industrial Association and CEO of the Punaro Group consultancy to discuss the ongoing presidential transition and how to best accomplish the monumental task of a peaceful transition of power.

— Update on Trump administration officials that will serve into the new Biden administration and confirmation status of President-elect Joe Biden’s cabinet on the eve of his Jan. 20 inauguration
— Outlook for Biden’s $1.9 trillion stimulus package as coronavirus cases and fatalities rise to record levels and another 1 million Americans lost their jobs
— Impact of House vote to impeach President Trump for an unprecedented second time for inciting his supporters to attack and ransack the Capitol
— Implications of Sen. Bernie Sander, I-Vt., as new Senate Budget Committee chair and rule changes that prohibit appropriations committee members like Sen. Dick Durbin, D-Ill., for also serving as the defense appropriations subcommittee chair
— The letter from the Joint Chiefs reminding military members of their allegiance to the Constitution and the need to fight radicalization and racism in the ranks
— Repercussions of 147 GOP members voting against certifying Biden on fictitious voter fraud allegations
— Trump administration decision to shift Israel from US European Command to US Central Command area of responsibility
— Kurt Campbell as the Biden administration’s deputy assistant to the president and the coordinator for Indo-Pacific relations on the National Security Council