China built its first big-deck amphibious assault ship in a remarkable amount of time. With another now in the water, the first has begun sea trials. 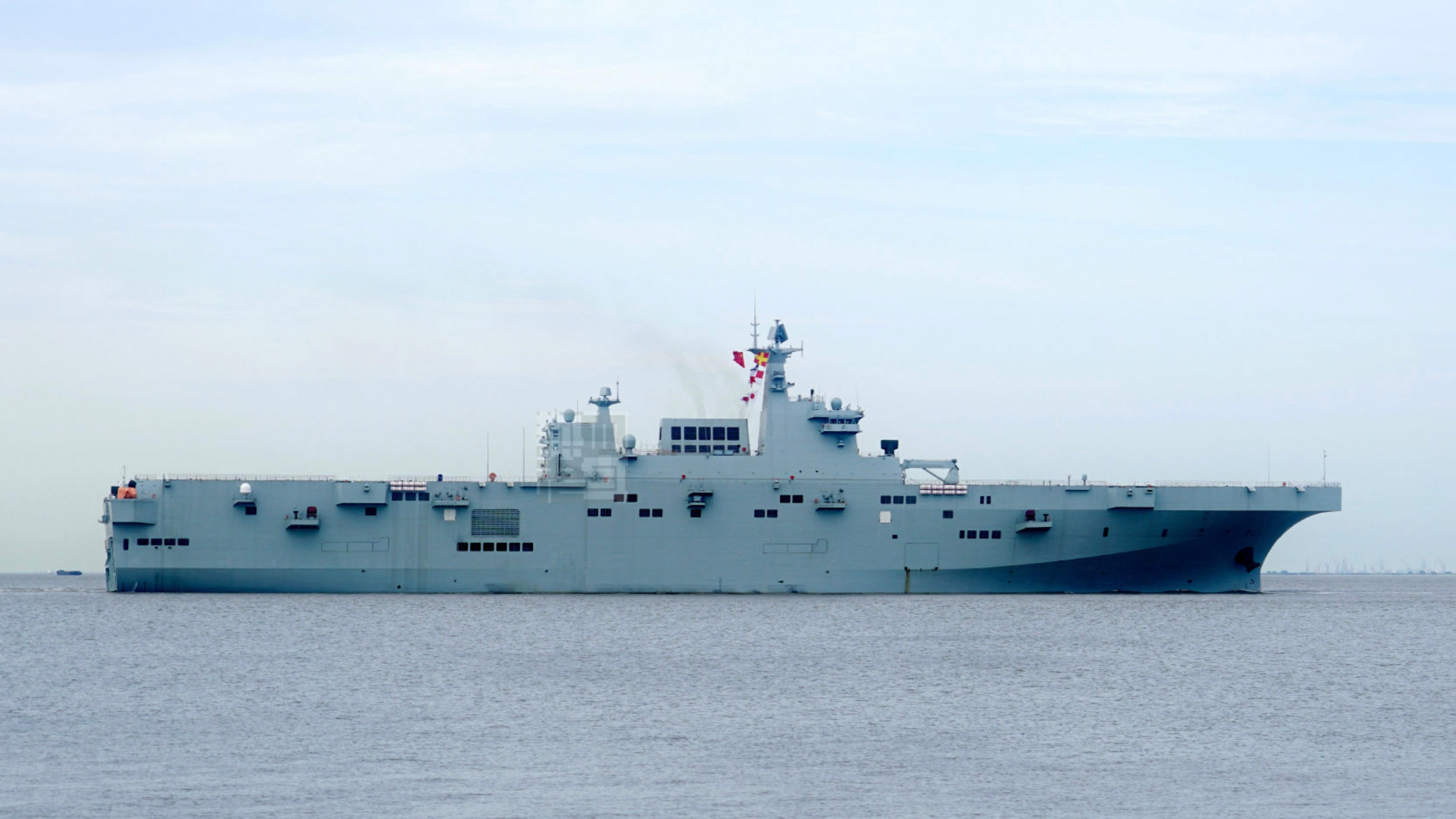 via @_老年_ from Weibo

The first of China’s big-deck amphibious assault ships has begun sea trials. Photos and video of the lead vessel in the People’s Liberation Army Navy’s Type 075 class emerged ear­li­er today when the still-unnamed war­ship depart­ed the pier at Hudong-Zhonghua Shipyard in Shanghai.

The ship’s first sail­ing fol­lows a period of remarkably rapid construction and a serious fire that occurred in port in April. At the time, it was unclear how much damage had result­ed from the blaze, which seemed to have emanat­ed from, or at least involved, the well deck of the big-deck amphibi­ous assault ship, also referred to as a land­ing heli­copter dock (LHD). Whatever damage was sus­tained now seems to have been fixed, although smoke stains were still vis­i­ble as the war­ship went to sea today. Furthermore, some photos pur­port­ed­ly show­ing the trials sug­gest the flight deck is still incom­plete.

“The pre­sumed maiden voyage will likely test the amphibi­ous assault ship’s main sys­tems, includ­ing propul­sion, nav­i­ga­tion and com­mu­ni­ca­tion,” local media reported. Quoting unnamed mil­i­tary ana­lysts, The Global Times added that it expect­ed the first Type 075 to be com­mis­sioned into PLAN ser­vice within “a year or two.”

The speed with which the vessel was com­plet­ed was already impres­sive. Development began in 2011 and images began to emerge online of the first ship’s keel under con­struc­tion between April and May 2019, though it is unclear when the China State Shipbuilding Corporation (CSSC) for­mal­ly began work on it. The first of the Type 075 class was then launched on Sept. 25, 2019, and left dry­dock within 24 hours of the launch cer­e­mo­ny.

The China State Shipbuilding Corporation launched a second exam­ple of the Type 075 in April, and a third has been ordered. The rapid con­struc­tion of China’s first LHD makes an inter­est­ing con­trast with the U.S. Navy’s second America-class amphibi­ous assault ship USS Tripoli, which was launched three years after its keel was laid.

It’s unclear exact­ly how big the Chinese LHD is. While early reports sug­gest­ed it would dis­place “more than” 30,000 tons, this has since been revised to a figure between 35,000 and 40,000 tons. Whatever the case, the Type 075 is sig­nif­i­cant­ly larger than both the Australian Canberra class (27,500 tons) and the South Korea Dokdo class(18,800 tons). Such a figure puts it closer to the size of the U.S. Navy’s Wasp-class amphibi­ous assault ships.

As a plat­form for mar­itime rotary lift, the Type 075’s hangar deck is expect­ed to accom­mo­date between 28 and 30 heli­copters. Currently, the Z-8 family and the smaller Z-9 are the pri­ma­ry PLAN rotor­craft, but they are likely to be joined by the deriv­a­tives of the Z-20 in the future.

Beyond manned air­craft, it seems China may also have plans to oper­ate a ver­ti­cal take­off and land­ing (VTOL) unmanned aerial vehi­cles (UAV) from the Type 075. An appar­ent mockup of just such an air­craft appeared on the deck of the first Type 075 in July, along­side a model of a Z-8J helicopter, indi­cat­ing some kind of war­ship com­pat­i­bil­i­ty trials.

Analysis has sug­gest­ed the VTOL drone is around 30 feet long, making it slight­ly small­er than a Z‑9 heli­copter. Exactly how such a UAV may fit into PLAN amphibi­ous war­fare doc­trine is unclear, but it will most likely oper­ate in a sim­i­lar manner as the U.S. Navy’s MQ-8C Fire Scout heli­copter drone.

Previously, The War Zone took a look at how the Type 075 fits into the PLAN’s wider modernization and expansion, as well as across the PLA as a whole — you can read about that here. Beyond the Type 075, it is rumored that China has ambi­tions to field an even more capa­ble amphibi­ous assault ship.

Last month it was report­ed that a so-called Type 076 was in plan­ning as a follow-on design of around 40,000 tons. This is alleged­ly a “mini air­craft car­ri­er” with an elec­tro­mag­net­ic aircraft launch system, imply­ing a fixed-wing capa­bil­i­ty from the outset. While China doesn’t cur­rent­ly pos­sess a short take­off and ver­ti­cal land­ing (STOVL) type, this is a doctrine that’s appar­ent­ly now under study, but it is more likely that this cat­a­pult would sup­port lighter drones. The new notion­al vessel — which has yet to been offi­cial­ly approved by Beijing — would also oper­ate up to 30 heli­copters plus UAVs.

In the mean­time, the Type 075 looks set to rad­i­cal­ly over­haul the PLAN’s expand­ing amphibi­ous capa­bil­i­ties. The new war­ships could poten­tial­ly project Chinese power through­out the Asia-Pacific region, a capa­bil­i­ty that has par­tic­u­lar rel­e­vance to the region’s dis­put­ed areas, includ­ing the South China Sea.

Whichever way you look at it, the Type 075 that has now begun sea trials is yet anoth­er impres­sive accom­plish­ment for China’s rapid­ly grow­ing naval force.