Cash-for-Passports in the South Pacific 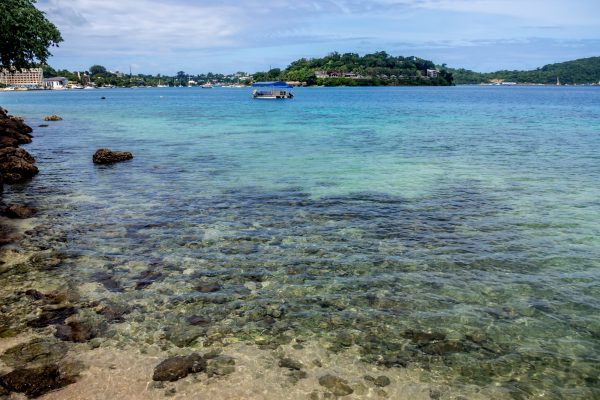 On the side of a dusty highway less than half-an-hour’s drive outside of Vanuatu’s capital, Port Villa, is a simple black-and-white sign that reads: Nawesa — an International Elite Community. On the other side of the fence is an empty 363-acre swathe of grass and bushland.

In the near future, this area is to be developed to accommodate three resorts, nearly 600 villas, and a shopping complex.

It’s the biggest, but not the only, investment project on the way. Just down the road, another complex, the Rainbow International City, while around half the size of the Nawesa development, is expected to provide housing, a shopping complex, a Buddhist academy, a hospital, a secondary and primary school, a church, a six-star hotel, and a casino.

There are several other “mega projects” in the works and while each may differ in size, location, and amenities, they all have one thing in common: they’re all backed by Chinese investment.

This has mostly been made possible by Vanuatu’s controversial citizenship by investment scheme, or as it’s known locally, “cash-for-passports.”

Despite the scheme being rife with controversy, the Solomon Islands is now considering a program of its own.

The idea is in its early days, having first been flagged just three weeks ago when Governor General Sir David Vunagi delivered a speech to mark the opening of parliament, in which he outlined the new potential revenue source for the country.

“The government is also undertaking due diligence at an innovative investment program that has the potential to bring in huge new revenue to our economy,” he said. “This is the citizenship by investment program.”

“A paper is expected to be tabled in cabinet later this month to consider this new and innovative opportunity that will require careful scrutiny of the proposal.”

In Vanuatu, there have been numerous reports of convicted criminals having their applications approved under the scheme, suggesting the government isn’t properly vetting the applicants.

James Batley, a Pacific Affairs researcher at the Australian National University and a former diplomat to Vanuatu and a high commissioner to the Solomon Islands, recently shared on Pacific Beat radio his doubts on whether the Solomon Islands has the capacity to properly scrutinize applicants and whether it’s worth the risk.

“It’s become a very important revenue stream for a country like Vanuatu,” he said. “But I think it’s important for countries also to consider what are the costs of these policies as well, not just the financial benefit.”

“There are some genuine risks in selling passports to the wrong sort of people and there’s also the risk and cost to the national reputation.”

The scheme was first introduced in Vanuatu in 2014. It wasn’t until a year later, in the aftermath of Cyclone Pam, that its potential to generate revenue was fully realized.

Cyclone Pam was one of the worst natural disasters to ever hit Vanuatu. Aid agencies reported at the time that between 50 and 90 percent of all homes, schools, churches, places of business, and other structures in the country suffered some damage from the storm. The United Nations estimated that at least 166,000 people required immediate food aid.

Seeing an opportunity, the government advertised the passports as a way to fund its relief. It was a major success.

Five years on, applicants can become a citizen in mere months, without even setting foot in the country, and while the government holds a tight lid on the finer details, it’s estimated that the scheme has brought in around $600 million.

A parliamentary committee found last June that more than 4,000 passports had been sold. The Vanuatu Daily Post then went on to report that at least 1,800 had been sold in 2018 alone, making passport sales the single largest source of revenue for the Vanuatu government.

It has been reported that most of the sales have come from Chinese nationals. This is despite it being illegal in China to hold dual citizenship, raising concerns that the Chinese government may be allowing the private investments as part of its efforts to gain influence in the country.

In August 2019, China’s influence over Vanuatu was detailed in a series of articles published by the Vanuatu Daily Post about six Chinese nationals – four of whom had Vanuatu citizenship – who were arrested in the middle of the night, denied a trial or access to legal counsel, escorted to an unmarked plane by Chinese police, and deported to China. They have not been heard of since.

The Vanuatu Daily Post wrote at the time that observers suggested that instead of a “debt trap,” Vanuatu was in a “revenue trap.”

“By allowing the government to become dependent on passport-related revenues,” they argued, “China can now demand favors in exchange for continued benign neglect of the program.”

For decades, Australia has played the part of big brother in the region, but according to the Lowy Institute China donated almost twice as much in aid to Vanuatu as Australia did in 2017.

During the 2018 APEC summit China secretly agreed to give Vanuatu $60 million for a mysterious new initiative called the Container Inspection Equipment Project. This grant represented about one-third of the overall annual aid China gifts to Vanuatu, yet suspiciously there is no publicly available information about what the project is, or what the money will be used for.

Vanuatu was the first Pacific nation to support Beijing’s claim in the South China Sea and the relationship has been getting stronger ever since – boosting the stability that investors wish to exploit. According to data published by Juwai, China’s largest international property market website, 81 percent of Chinese travelers are in Vanuatu for investment reasons.

Fighting over influence in the Pacific is not unique to Vanuatu though.

In May 2019, Australia’s then-newly elected Prime Minister Scott Morrison made his mostly symbolic first overseas visit as head of state to the Solomon Islands, in an assumed effort to bolster Australia’s “Pacific step up” in the face of Chinese influence.

Just a few months later, though, the Solomon Islands and Kiribati made the diplomatic switch from Taiwan to China.

One of the main contentions with the current passport scheme in Vanuatu is the concern among locals that they will not have access to the facilities being developed by big investors.

In the case of the Rainbow International City, known also as “Little Singapore,” the first thing to be built was an eight-foot, solid, concrete wall separating the property from its local neighbors.

An article published in the Vila Times newspaper said that the “concrete wall was built around the property to protect it from trespassers.”

Ironically, the paper was founded and is run by the same investment company that is behind Rainbow City. They also run a consultancy company offering help to Chinese nationals in securing Vanuatu citizenship. On its website, they highlight the country being a tax haven as a reason to apply.

In the lead-up to last month’s national election in Vanuatu, the government received a review of the program and was presented with three options on how to move forward: stop citizenship sales completely, continue the current program but fix the issues with screening, or introduce a new citizenship investment program with stricter conditions on constructing real estate and creating jobs.

Foreign Minister Ralph Reganvanu said at the time of the review’s release that they would freeze all citizenship sales, stop the current program, and do a national consultation.

This week, however, Vanuatu was battered again by a category five cyclone, with initial reports suggesting that between 50 and 70 percent of buildings in Luganville, Vanuatu’s second largest city, were damaged. Officials are expecting the recovery to take at least a year, if not longer given the country’s lockdown due to the spread of COVID-19.

Questions are now being asked as to whether the government may yet again look to the visa scheme as a way to cover its losses. For Vanuatu it appears that while the revenue remains helpful in the aftermath of natural disasters it may also be the country’s Achilles heel, which should serve as a warning to the Solomon Islands ahead of its own discussions.