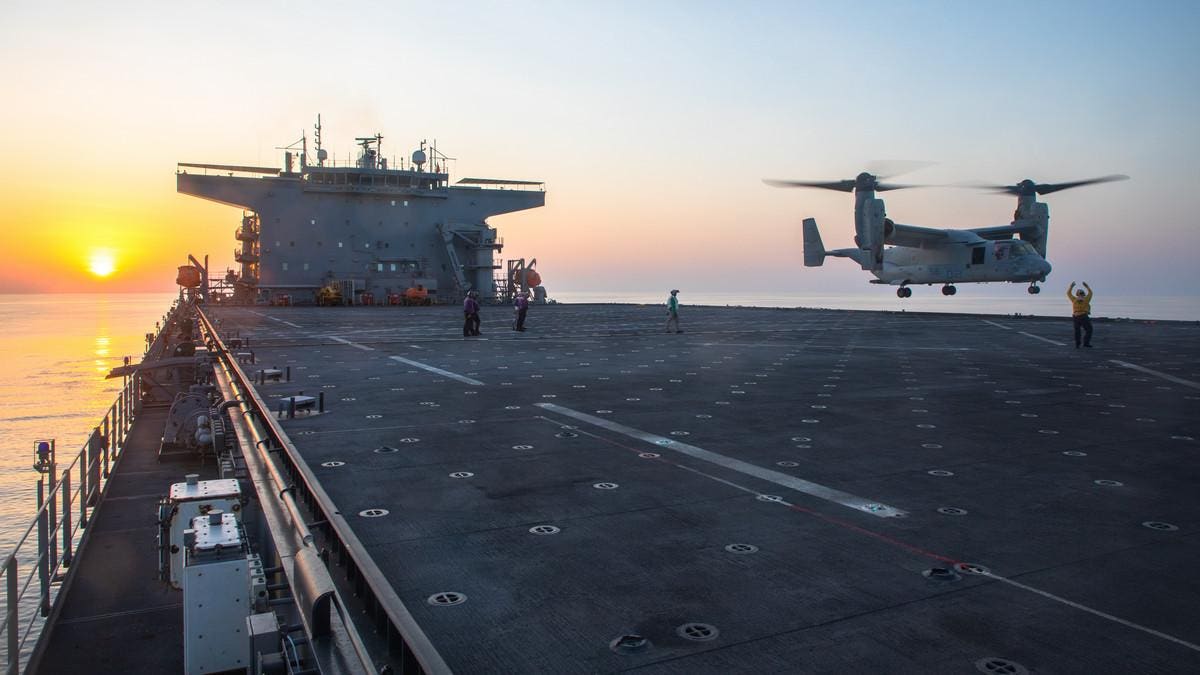 The fire that broke out on the U.S. Navy amphibi­ous ship USS Bonhomme Richard at a ship­yard in San Diego last month caused catastrophic damage to 11 of 14 decks on the 844-foot vessel.

The Navy has award­ed a $10-mil­lion con­tract to begin post-fire clean-up, but that doesn’t mean the ser­vice plans to repair the badly-dam­aged BHR. Restoration could cost hun­dreds of mil­lions of dol­lars and take years, poten­tial­ly making it more cost-effec­tive simply to replace the 22-year-old ship.

But replace her with what? The Navy has options. And the ugli­est option might actu­al­ly be the best one.

The Navy could accel­er­ate pro­duc­tion of new America-class assault ships, which like BHR and her seven Wasp-class sis­ters are big-deck ves­sels that com­bine troop-berthing, vehi­cle-stor­age, a flood­able well-deck for land­ing craft and a full-length flight deck.

Just one U.S. ship­yard, the Huntington-Ingalls yard in Pascagoula, Mississippi, builds the avi­a­tion-opti­mized Americas. America and her sister ship Tripoli already are in com­mis­sion. Bougainville began pro­duc­tion in 2019 and could join the fleet in 2024.

Accelerating LHA‑9 would require hun­dreds of mil­lions of dol­lars in advance fund­ing. But if Trump wins re-elec­tion in 2020, there’s no reason he wouldn’t also divert that money to his border wall. The U.S. Constitution gives Congress the power of the purse, but the Republican-dom­i­nat­ed U.S. Supreme Court twice has endorsed the uncon­sti­tu­tion­al diver­sion of Congressionally-appro­pri­at­ed fund­ing.

Instead of build­ing a new assault ship to replace BHR, the Navy could acquire a dif­fer­ent kind of vessel — or mix of ves­sels — with equiv­a­lent capa­bil­i­ties. U.S. Marine Corps com­man­dant Gen. David Berger force­ful­ly has argued for this approach in order to expand and diver­si­fy the amphibi­ous force.

“We must con­tin­ue to seek the afford­able and plen­ti­ful at the expense of the exquis­ite and few when con­ceiv­ing of the future amphibi­ous por­tion of the fleet,” Berger said. “We must also explore new options, such as inter-the­ater con­nec­tors and com­mer­cial­ly-avail­able ships and craft that are small­er and less expen­sive, there­by increas­ing the afford­abil­i­ty and allow­ing acqui­si­tion at a greater quan­ti­ty.”

A bigger land­ing fleet with more dif­fer­ent types of ships would be more resilient in the face of Chinese mis­sile attacks, Berger explained. “It would be illog­i­cal to con­tin­ue to con­cen­trate our forces on a few large ships. The adver­sary will quick­ly rec­og­nize that strik­ing while con­cen­trat­ed is the pre­ferred option. We need to change this cal­cu­lus with a new fleet design of small­er, more lethal and more risk-worthy plat­forms.”

The Navy already is buying ships that could make good sub­sti­tutes for ves­sels such as BHR. The ser­vice is in the process of buying as many as six expe­di­tionary sea-base ships, or ESBs.

Each ESB is 764 feet long. The type’s huge, 52,000-square-foot flight deck can accom­mo­date every rotor­craft in the U.S. inven­to­ry. Under the flight deck is an open-air well-deck for land­ing craft. An ESB can slight­ly sub­merge this lower deck to allow land­ing craft to sail on and off. There’s berthing on an ESB for hun­dreds of people. The type easily could add addi­tion­al berthing.

The main dif­fer­ence between an ESB and an LHA is that the latter can sup­port F‑35B jump jets — the flight deck on the former appar­ent­ly is too flimsy for fixed-wing planes. A con­ver­sion of a com­mer­cial tanker design, the ESB also is light­ly-built and light­ly-armed com­pared to an America.

An ESB doesn’t look like much. It might even be fair to call the type “ugly.” But that’s not to say an ESB can’t fight.

“We bring mul­ti­ple mis­sions to the streets out there,” Capt. David Gray, the skip­per of the new ESB Woody Williams, told USNI News as Williams set sail on her first deploy­ment in July. “We’ll pro­vide anoth­er asset for them to be out there, to allow more flex­i­bil­i­ty for the amphibs that are out there and the other ships out at sea. We can do other mis­sions that are in the lower end while they’re out doing the larger end, but when it comes to it we can all hit the high-end mis­sions togeth­er.”

It wouldn’t be hard to add anoth­er ESB to the ship­build­ing plan. After all, an ESB is cheap at just $650 mil­lion. There’s a four-year gap between the last ESB the Navy bought in 2019 and the next ESB it plans to acquire in 2023.

National Steel and Shipbuilding Company in San Diego, which has built all the ESBs so far, is busy build­ing new fleet oilers. But the ESB design isn’t overly-com­plex. Another yard — namely, Huntington-Ingalls — should be able to build the type.