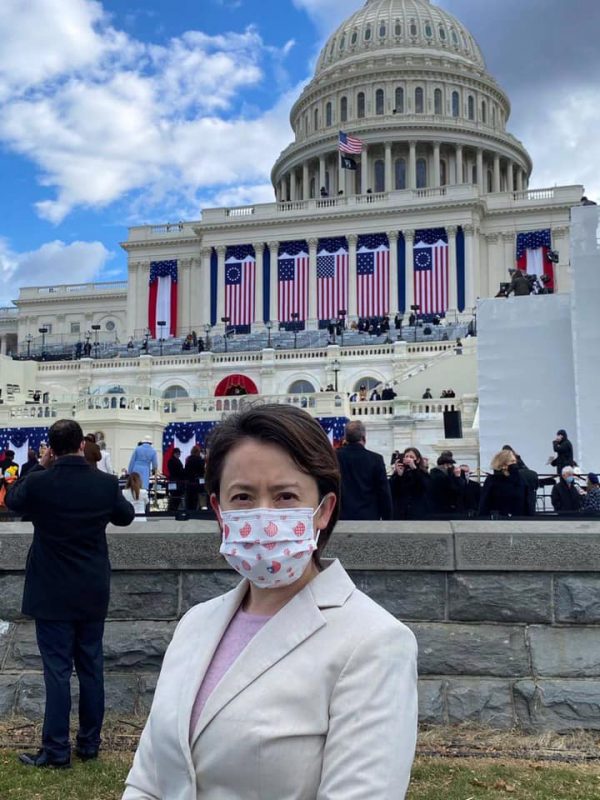 The inauguration ceremony for U.S. President Joe Biden and Vice President Kamala Harris was historic for many reasons: Harris became the United States’ first female vice president, and the first vice president of either Black or South Asian heritage (Harris is both). Biden’s oath also brought an end to the turmoil of the Trump administration. Alongside those domestic firsts was one on the foreign policy front: Taiwan’s representative to the United States, Hsiao Bi-khim, was in attendance at the ceremony.

Hsiao tweeted a video of herself standing in front of the U.S. Capitol building on January 20, saying, “I’m honored to be here today on behalf of the people and government of Taiwan.”

“Democracy is our common language, and freedom is our common objective,” she added. “I look forward to working with the next administration in advancing our mutual values and interests.”

“The invitation to Taiwan’s Representative to the U.S. to attend the Inaugural Ceremonies, the most significant event celebrating U.S. democracy, highlights the close and cordial ties between Taiwan and the United States based on shared values,” Taiwan’s Foreign Ministry said in a statement. The ministry also highlighted that the ceremonies were scaled back due to the COVID-19 pandemic, making Hsiao’s inclusion all the more notable.

According to both Taiwan’s Central News Agency (CNA) and the chairman of the U.S. Senate Foreign Relations Committee, Hsiao was the first representative of Taiwan to receive an official invitation to a U.S. presidential inauguration since the severing of formal diplomatic ties in 1979. CNA clarified that previous representatives have attended U.S. inauguration ceremonies in an informal capacity, “through the courtesy of U.S. legislators.” Hsiao, however, received an invitation directly from the U.S. Joint Congressional Committee on Inaugural Ceremonies, which would have had to get approval from the Biden team.

In particular, previous Secretary of State Mike Pompeo announced he was voiding past restrictions on U.S.-Taiwan interactions on January 9, less than two weeks before the inauguration. There was some question as to how the incoming Biden administration would approach that decision, but Biden’s nominee for secretary of state, Antony Blinken, indicated agreement in his confirmation hearing on January 19. When asked about the decision to rescind the previous guidelines, Blinken replied, “I want to see that process through to conclusion if it hasn’t been completed, to make sure that we’re acting pursuant to the mandate in the (Taiwan Assurance) act that looks at creating more space for contacts.”

The next day, Hsiao’s presence at the inauguration sent a clear signal that the Biden administration will not shy away from setting new precedents for U.S.-Taiwan exchanges.

Taiwan’s government “looks forward to working with the new U.S. administration to further strengthen bilateral relations and contribute to the promotion of peace, stability, and prosperity in the Indo-Pacific region,” Taiwan’s Foreign Ministry said in a statement.