As US Military Moves Into Palau, China Watches Intently 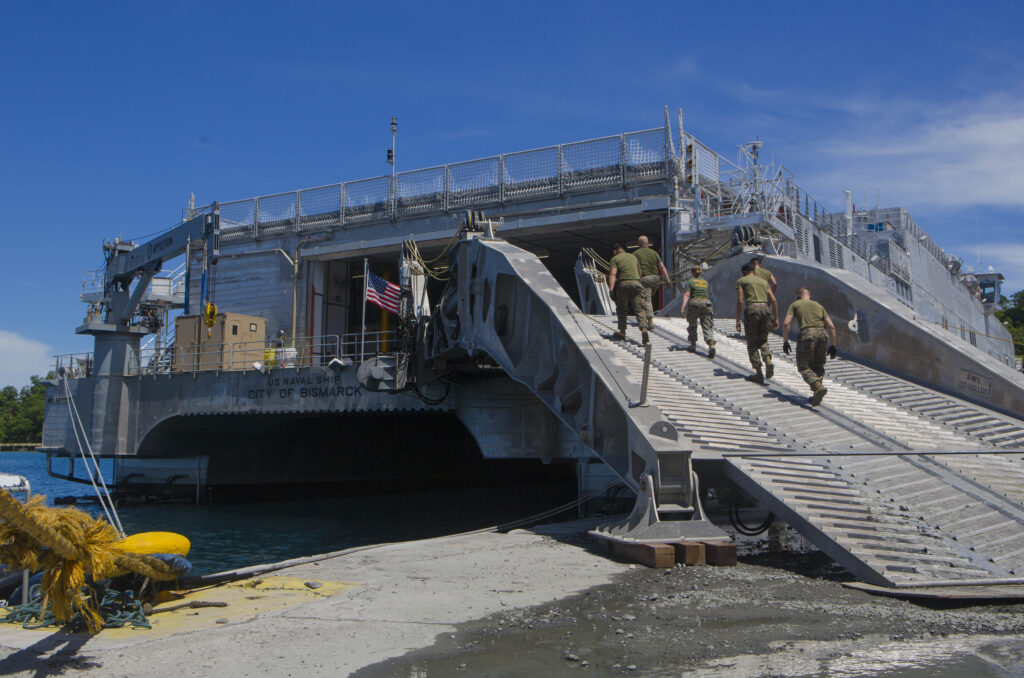 US Marines and sailors disembark in Palau in July.

WASHINGTON: The United States is stepping up its military presence and activity in and around the small island nation of Palau in the Philippine Sea, a strategic location coveted by Pentagon planners as the US looks to expand its footprint in the region.

The past two months have seen visits by both the secretaries of Defense and the Navy, where commitments were offered about more US attention to the country, according to meeting notes seen by Breaking Defense.

The president of Palau, Tommy Remengesau, recently handed letters to the two US officials in which he asked the US to consider building a new base in his small nation of 17,000 inhabitants.

The ask falls squarely within the emerging US military strategy in the region which revolves around distributing forces to more places, with smaller footprints than the megabases on Guam, Okinawa, and Japan.

Defense and State Dept. officials have embraced Remengesau’s eagerness to draw closer to the United States, and there are signs of progress in getting agreements signed and begin moving forward.

One State official, speaking on condition of anonymity, said “we have a great relationship” with the Republic of Palau, “and look forward to finding ways to strengthen our cooperation in areas of mutual security interests.” They added, however, that “the sensitive discussions between our senior leaders” still have a way to go.

Remengesau is clearly ready for those talks to move along. Under the Compact of Free Association between the two countries signed in 1994, the US is obligated to defend for the country, while allowing citizens of Palau to serve in the US armed forces.

In his meeting with Remengesau, Braithwaite stressed Palau’s “strategic location” which is “extremely important to US presence in the region,” according to the meeting notes. The secretary also made a commitment to “enhanced presence here and for more US Military activity in the future.”

There has already been significant movement.

Just before Braithwaite’s visit, the Japan-based USS Comstock amphibious ship docked for a weeks-long stay where sailors are working to remove unexploded ordnance. On Oct. 12, a C-130 flight brought 24 Air Force personnel to evaluate runways and tarmacs at airfields in Babeldaob, Peleliu and Angaur.

The Coast Guard Cutter Sequoia  also arrived this month to lay navigation buoys, following a similar visit in May.

The string of islands in the Philippine Sea sits between the Philippines and Guam, the former being a major hub for the US Navy and Marine Corps, and also occupies a critical location for China in moving out of the First Island Chain.

“Palau is primary geography for operating forces forward in the region,” said Eric Sayers, a former Indo-PACOM advisor and adjunct senior fellow at the Center for New American Security. “It’s an ideal opportunity given the geographic and political restraints we face to our posture in the region.”

The Navy has been pushing the idea of “distributed maritime operations,” in which ships deploy and move in a more unpredictable manner, throwing Chinese and Russian intelligence and tracking assets off track and keeping them guessing.

In the Philippine and South China seas in particular, where long-range Chinese weapons can hold more and more territory at risk, having new ports to pull in and then deploy from, would go a long way to that end.

Similarly, the Marine Corps is pushing hard to transition to smaller, more mobile and lethal units spread around the Pacific. Commandant Gen. David Berger is establishing several Littoral Regiments that can provide their own air defense and precision fires assets

The units are part of the Corps’ effort to move toward building a fast-moving, hard to detect “inside force” that can operate within range of Chinese and Russian weapons ranges while packing a potent offensive punch — and staying away from the megabases well ranged and targeted by Chinese missiles. Having Palau as a new staging or jump-off area would prove hugely helpful.

The Navy and Marines are also developing a new class of logistics ship that can resupply Marines deployed to ad hoc island bases, and a Light Amphibious Warship to carry Marines as well as fuel and supplies. All of these ships, and Marine units, could make use of facilities at Palau.

Significantly, Palau is also one of just four Pacific nations to recognize Taiwan, after the Solomon Islands and Kiribati walked away and changed their diplomatic recognition to Beijing in 2019.

That fact is not lost on US policymakers, increasing their eagerness to pull Palau even closer as the Trump administration doubles down on the US relationship with Taiwan, sparking Chinese complaints over growing US arms sales to Taipei.

The PLA Navy has ramped up its deployments into the Philippine Sea in recent years while also increasing the number of marine research expeditions in the area, Collin Koh of the S. Rajaratnam School of International Studies in Singapore said. It’s part of “Beijing’s quest to build first a regional, then eventually global, ocean observation network that obviously has both civilian and military applications (in particular, undersea warfare).”

With those increased transits, having a base of operations in Palau “could help improve the US military’s ISR in the area, helping keep tabs on these activities including PLA Navy submarines,” Koh added.

Because of Palau’s continued recognition of Taiwan, China slapped a boycott on the country in 2017, banning Chinese tourism, which severely impacted the country’s economy. The move has raised concerns in Palau and Washington that China’s predatory economic strategy was being employed in the country, where China offers “debt trap” investments in exchange for further alienating Taiwan.

Whatever the US footprint in the country looks like going forward, it’s clear that both sides — at the moment — appear to be reading from the same playbook. That’s good news for the Pentagon and US ally Taiwan, but China’s growing influence in the region and clear ambitions to extend that power further afield, will keep close tabs on what happens next.