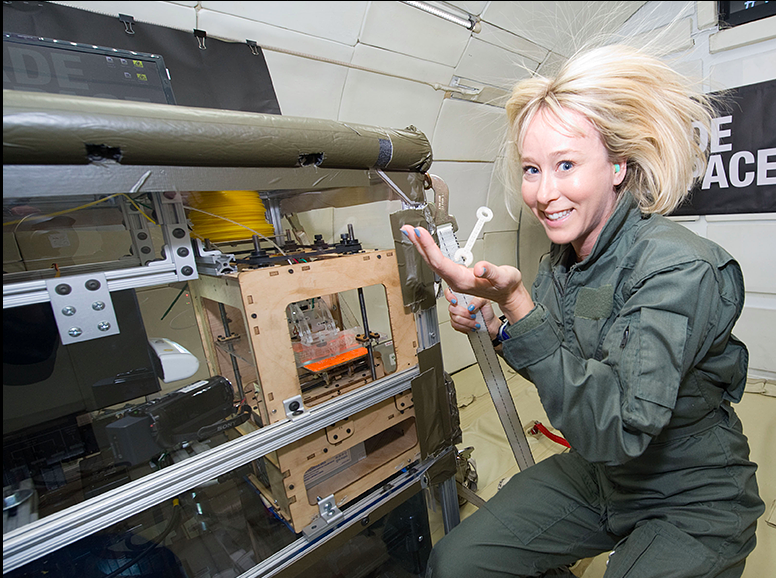 NASA has been experimenting with 3D printing on the ISS since 2014.

WASHINGTON: Figuring out how to create a 3D printing-based supply chain in space will be the focus of one future ‘challenge’ for innovators competing for Air Force prize money, service acquisition czar Will Roper says.

“I’ll make a commitment here that we will have a space-based challenge coming soon to a theater near you,” he said Friday, announcing the winners of the Air Force Advanced Manufacturing Olympics’ challenge to develop a supply chain strategy to increase the service’s use of 3D printing. “That’s how you win wars — it’s truly logistics that wins,” he added.

The first Advanced Manufacturing Olympics, sponsored last week by the Rapid Sustainment Office and the Air Force Life Cycle Management Center (AFLCMC), comprised five separate ‘challenges’ for commercial entrepreneurs — with the ‘gold medal’ winners of each receiving $100,000 and good prospects of a future Air Force contract. All totaled, the service gave out $1 million to 15 companies winning ‘gold, silver and bronze medals.’ The specific contests were:

“Additive manufacturing can also help to reimagine a new space architecture that is not constrained by the design and manufacturing confines of gravity, current manufacturing processes, and launch-related structural stresses,” the study, called “3D Printing In Space,” said.

A March 2020 study by the Institute for Defense Analyses’ Science & Technology Policy Institute (STPI) found that more than 100 organizations (ranging from purely commercial to intergovernmental) in 17 countries are working on some aspect of on-orbit servicing and advanced manufacturing. In nine of those countries, the Global Trends in On Orbit Servicing, Assembly and Manufacturing (OSAM) study found “significant” activities in one or more aspect, with the leading nations the United States closely followed by Russia and China. All three of those countries could have “competency” in on-orbit assembly and manufacturing within 15 years, the study found.

The STPI study cited a market analysis by Northern Sky Research (NSR) in February 2020 that predicted “over $3 billion in cumulative revenues will be generated by 2029 from applications such as satellite life extension, relocation, deorbiting, salvage, robotics, and space situational awareness.” The NSR analysis (which costs an impressive $4,945 to access in full) surveys ongoing work by some 35 companies, ranging from small firms like Tethers Unlimited to large defense firms such as Northrop Grumman and Lockheed Martin.