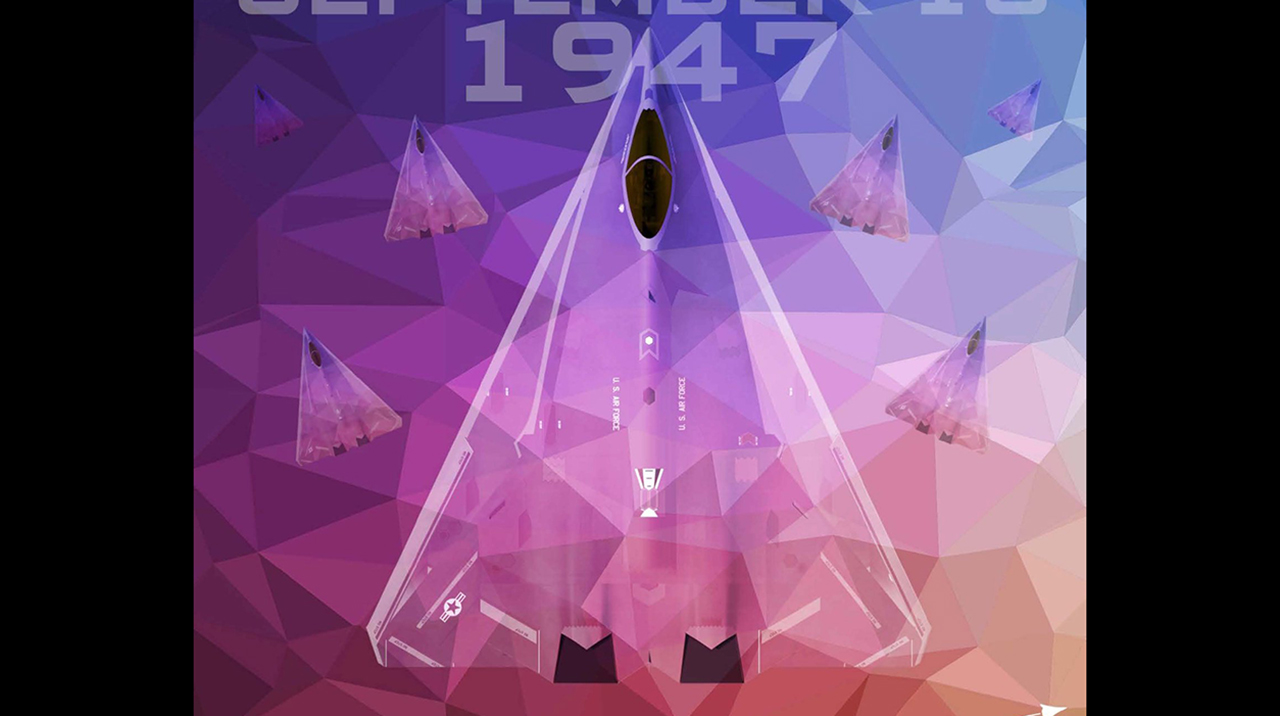 The Secretary of the Air Force Public Affairs has recently published on the Defense Visual Information Distribution Service an interesting graphic for the Air Force’s 73rd birthday. What catches immediately the eye is that the graphic features prominently, in the center and in the background, an unknown new aircraft that has not been confirmed as real or fictional.

The graphic, originally uploaded to the DVIDS website on Sept. 8, 2020, has started making the rounds today, after (a crop of) it was published by the U.S. Air Force Materiel Command, to celebrate the Anniversary:

Happy birthday, @usairforce! As we celebrate the 73rd birthday of the Air Force, we celebrate our #Airmen. Their diversity of background, experience, demographics, perspectives, thought & organization are the life force of our service.#USAF73 pic.twitter.com/p7NxTQYPyr

The timing is really interesting, as this graphic, comes just few days after the announcement by Dr. Will Roper, the Assistant Secretary of the Air Force for Acquisition, Technology and Logistics, that the Air Force has secretly designed, built and flown at least one full-scale prototype of a new generation fighter aircraft.

Having considered this, the aircraft in the image could be completely fictional or it could be a hint at the design that was chosen for the first prototype build for the Next Generation Air Dominance (NGAD) program.

Even if a graphic motive has been superimposed over the aircraft, making it difficult to discern some of the details, the design looks based on a unique triangular shape from the nose to the tail, with an angle of about 50° at the nose. If correct, this feature already differentiates this design from the concept proposed by Boeing and Lockheed Martin for the NGAD program. However, the “masking graphic” could hide a more classic design with two different angles, one for the front and one for the wings, that could be exposed by a darker coloration of the aircraft and another grey “No Step” area inside the aircraft perimeter.

The next generation aircraft has a cockpit, sign of the aircraft being manned or optionally manned. Two engines are positioned beside the dorsal spine, with exhaust nozzles similar to the ones found on the YF-23, with the lower surface longer than the upper one to mask the engine’s infrared signature from below. We can’t see any kind of tail planes, hence the aircraft is based on the flying wing concept. The absence of vertical tail planes could be dictated by a further reduction of the Radar Cross Section, especially from the sides. An air-to-air refueling receptacle is also present on the dorsal spine.

BTW, the shape vaguely reminds the one of the mysterious aircraft spotted in the U.S. in 2014:

Let’s keep in mind that all of this could just be speculation, at least until the first photos of the NGAD demonstrator will be available to the public because, as we said earlier, the aircraft in the graphic could be entirely fictional.

Here are the only verified info actually available about the demonstrator as written in the article published by The Aviationist on Sept. 15, 2020:

The existence of the demonstrator was first confirmed by Dr. Roper to reporter Valerie Insinna of Defense News during the Air Force Association’s virtual Air, Space and Cyber Conference 2020: “We’ve already built and flown a full-scale flight demonstrator in the real world, and we broke records in doing it. We are ready to go and build the next-generation aircraft in a way that has never happened before.”

While the details about the aircraft are still classified, including its appearance, the first new fighter jet designed and flown in 20 years, since the Joint Strike Fighter competition between the X-32 and X-35, was designed using advanced Computer Aided Engineering (CAE) techniques and Digital Twin concepts to build and test a virtual version of the aircraft, before moving to physically build and fly the prototype.

According to Defense News, Dr. Roper declined to comment on the number of prototypes, the manufacturer and the timing of development and first flight, the aircraft’s mission, unmanned or optionally manned capabilities, low observability and  supersonic or hypersonic speeds.

Moreover, we have already seen some nice graphics showcasing futuristic aircraft in posters celebrating the Air Force’s birthday. In 2017, one of such posters, created as part of a series of posters celebrating the lead up to the Air Forces 70th birthday, featured the proposed successor to the SR-71 Blackbird, the unmanned, hypersonic SR-72, that “would travel at twice the speed of the SR-71, penetrating defended airspace and striking a target before being detected.”