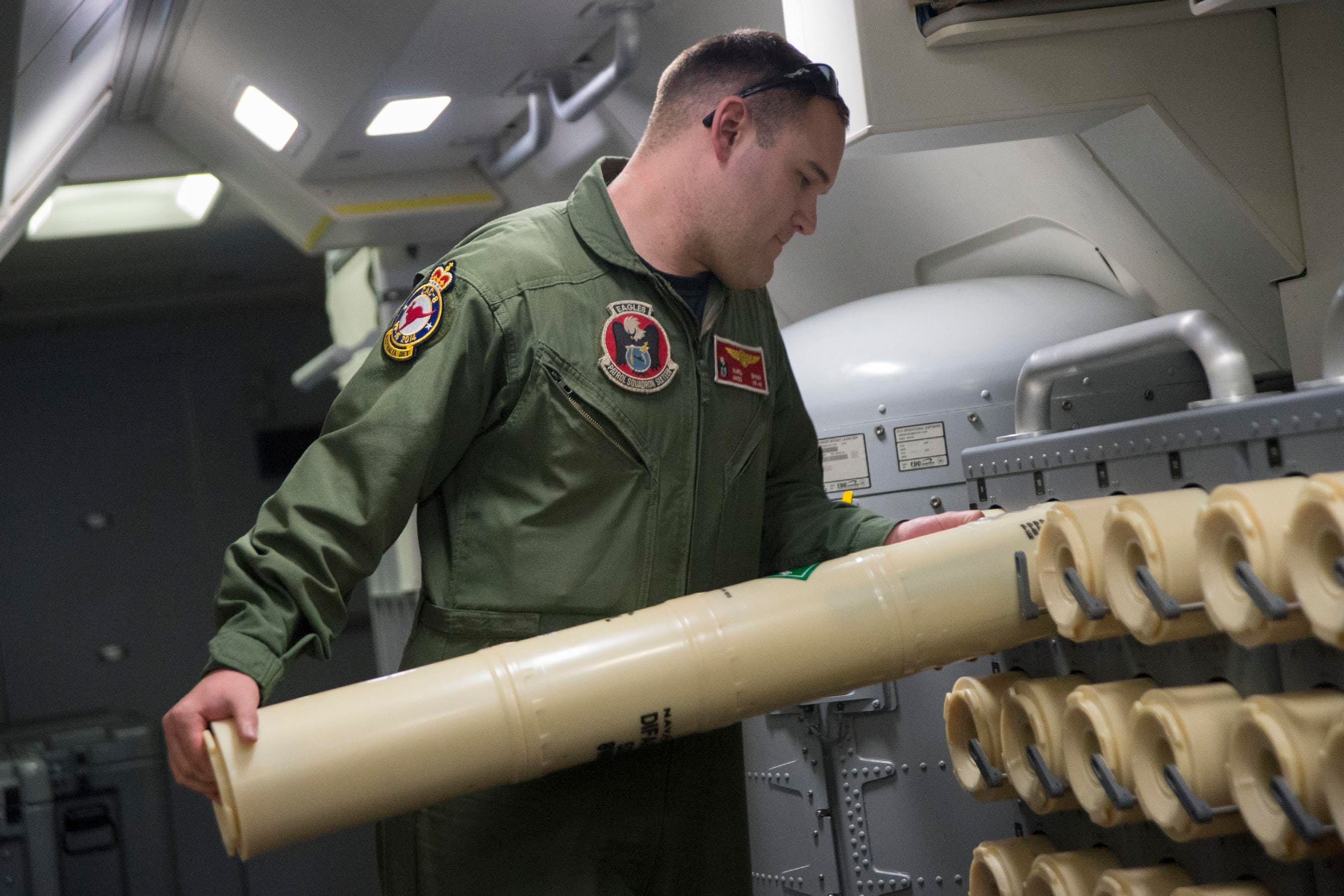 Aside from being an enormous management problem, the Navy’s undersea accountability vacuum is a particular threat to low-cost, often-overlooked tools like sonobuoys. Neither a munition nor an unmanned vehicle, maritime patrol aircraft usually deploy these low-key undersea-vehicle-targeting sensors. Crammed with high-tech gear, sonobuoys are dropped from as high as 30,000 feet, and, once they hit the water, they feed sensor data and targeting information to U.S. forces.

Since the Cold War, these cost-effective sensors have been unheralded building blocks of America’s undersea dominance. But, time and time again, multi-billion-dollar submarines and other big-ticket items captured the Navy’s imagination, while the pedestrian tools needed for day-to-day work—like the low-cost, submarine-tracking sonobuoys—got ignored.

As crucial as sonobuoys are, these unappreciated sensors have long bobbed in the wake of other “Big Navy” priorities, almost dying out entirely after the Cold War. But things were changing. In 2017, America’s sole sonobuoy manufacturing organization teetered on the brink of collapse, and a hurried government intervention gave the bedraggled sonobuoy industrial base a slim lifeline.

By 2019, anti-submarine warfare was enjoying something of a renaissance, and a vague plan was in place to secure the sonobuoy industrial base. The Trump Administration declared that sonobuoys were “essential to the national defense,” expanding domestic sonobuoy production under the Defense Production Act. If government plans were successful, by 2024, two healthy companies, U.S.-based Sparton Corporation and the U.K.-based Ultra Group, were poised to underpin America’s re-invigorated sonobuoy industrial base.

Concurrently, the government mounted a modest effort to update sonobuoys—tools that are, essentially, the same as when Kenneth Braithwaite, the current Secretary of the Navy, was flying Navy antisubmarine patrols in the eighties. The Naval Air Systems Command’s Air-Anti Submarine Warfare Systems Program Office (PMA-264) and the Office of Naval Research recently funded a range of research programs to keep the sonobuoy relevant into the 2030’s.

Despite the multifaceted plan, America’s commitment to the sonobuoy does not seem solid. Too many anti-submarine warfare stakeholders are putting their own interests before the sonobuoy. In total, the Navy’s contradictory signaling about the sonobuoy’s future threatens to unravel the government’s ongoing efforts to save America’s sonobuoy industrial base from ruin.

Last month, the Hudson Institute released a study, “Sustaining the Undersea Advantage: Transforming Anti-Submarine Warfare Using Autonomous Systems.” It lauded the potential of unmanned anti-submarine warfare systems, detailing how new tactical approaches could, if imposed over a five-to-ten-year time horizon, trim billions from anti-submarine operations. But to do this, Hudson sketched out a sonobuoy-free future, and the investigators suggested that new unmanned systems could drive sonobuoy use down to almost nothing. Describing a largely-unmanned future Pacific scenario, Hudson investigators waved their hands about, declaring that only 1100 sonobuoys would be needed to keep “more than two dozen” modern Chinese submarines from “becoming a threat” over the course of a month.

In reality, such a task would need thousands and thousands of sonobuoys.

It’s not just the sonobuoy. Other advocates are eager to diminish the contributions made by the Navy’s relatively modern sonobuoy-launching and data-processing platforms. In time, about 117 P-8A “Poseidon” patrol craft will be able to deploy and monitor their magazine of 120 sonobuoys (twice that of America’s legacy P-3 “Orion” sub-hunter), while the Navy’s MH-60R helicopters, which carry 25 sonobuoy launchers apiece, will lend a hand as well. Already, as undersea threats increase, both platforms are exceeding their originally estimated mission utilization rates.

Internationally, American allies have almost universally selected P-8 and MH-60Rs to expand and modernize their anti-submarine patrol fleets. To further boost capacity, simple “bolt-on” sonobuoy launchers have been developed for C-130 Hercules transport aircraft, Unmanned Aerial Vehicles or other platforms of convenience, making the L3Harris-built sonobuoy launch system one of the most widespread launch systems in the maritime outside of the ubiquitous U.S. Raytheon-built MK 41 vertical launch systems (VLS) aboard U.S. and allied surface combatants.

Rather than look for schemes to kill of the sonobuoy, the U.S. Navy may be better positioned to embrace the sonobuoy, directing researchers to exploit both the sonobuoy form-factor and sonobuoy launch platforms in new and exciting ways. But fitting a vision into a 39-pound, 3-foot long form factor is tough, boring and highly technical work. It is much more fun—and much more profitable—to propose an entirely new technology at the expense of quite critical but relatively little-known warfighting tools. In so doing, the nation risks sacrificing what works for sexy but unproven technologies. The promise of fancy high-tech solutions can seem to be more of a bureaucratic crutch, allowing decision-makers to “kick the can” on urgent funding decisions and sacrifice the present for a future that may never actually work.

New, empowered leadership might help guide the way forward. Historically, centralized strategic guidance kept low-end, low-cost enablers like the sonobuoy from drifting away. In the sixties, centralized strategic oversight by the Anti-Submarine Warfare Command (OP-95 and, later, OP-71) ensured that the low-cost sonobuoy received the attention it deserved. In fact, one of the first actions taken by OP-95 upon its establishment in 1964 was to direct that long-ignored Directional Frequency Analysis and Recording (DIFAR) sonobuoy technology be targeted for priority development. Fifty-six years later, DIFAR sonobuoys remain critical enablers of anti-submarine warfare.

Too many good ideas are fighting over what will be, in the next few years, a dwindling pot of money. In this strange period between Administrations, the best thing the Navy can do is to empower someone—or convene a high-powered Project Nobska-like team—to make some tough decisions about the future of anti-submarine warfare. There are plenty of things for the Navy to decide, but one simple decision is this—either the sonobuoy is going to be a unifying, widely-used antisubmarine tool for the next decade or the sonobuoy is a dead-end, decaying technology that needs to be replaced sooner rather than later. Drifting into a solution will not work. Both paths require planning and action to be successful.

Strategic thinking is hard. Rather than dither over a host of shiny and diverse high-tech futures in anti-submarine warfare and elsewhere, it is high time for the Navy to get serious about the business of deciding on a path and then driving forward to meet it.