A Major US Ally in the Pacific Wants to Scrap an Important Military Deal With the US, and That May Give China an Edge

By ymfhu
Posted February 14, 2020
In China, ASEAN, Australia, Air
A Major US Ally in the Pacific Wants to Scrap an Important Military Deal With the US, and That May Give China an Edge2020-02-142020-02-14https://staging.taktikz.com/wp-content/uploads/2015/07/taktikz-Original.jpgtaktik(z) GDIhttps://staging.taktikz.com/wp-content/uploads/2015/07/taktikz-Original.jpg200px200px Philippine President Rodrigo Duterte fol­lowed through on numer­ous threats to end his coun­try’s Visiting Forces Agreement with the US on Tuesday, notifying Washington of his intent to with­draw, trig­ger­ing a 180-day count­down.

On Friday, Army Secretary Ryan McCarthy said he thought the two sides could reach a polit­i­cal res­o­lu­tion, but recent his­to­ry sug­gests the pact’s demise could be an oppor­tu­ni­ty for China in a strate­gi­cal­ly valu­able region.

Since taking office in 2016, Duterte has repeat­ed­ly crit­i­cized the US and US offi­cials. The US, which ruled the Philippines as a colony in the first half of the 20th cen­tu­ry, remains close with the Philippines and is very pop­u­lar there — as is Duterte, who had 87% approval in December.

But the Philippine pres­i­dent nev­er­the­less decid­ed to end the VFA, with his spokesman saying it was “time we rely on our­selves” and that the coun­try “will strength­en our own defens­es and not rely on any other coun­try.”

While President Donald Trump said he didn't "really mind," the US Embassy in the Philippines said it would “care­ful­ly con­sid­er how best to move for­ward,” and Defense Secretary Mark Esper said it was “a move in the wrong direc­tion.”

Asked on Friday about the deci­sion, McCarthy touted US-Philippine ties. 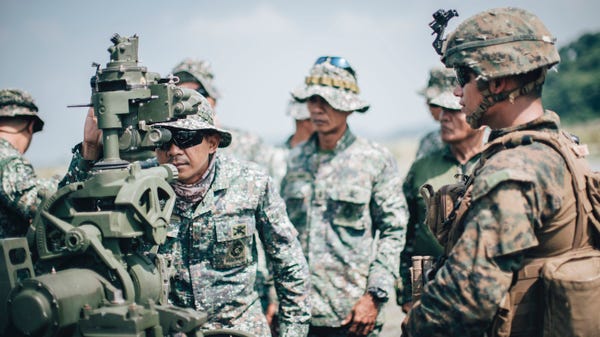 A Philippine marine looks through the sights on a US Marine Corps M777 towed 155 mm how­itzer at Colonel Ernesto Ravina Air Base in the Philippines, during exer­cise KAMANDAG 3, October 12, 2019. US Marine Corps/Staff Sgt. Donald Holbert

Washington and Manila have “a long his­to­ry” of work­ing “very hard togeth­er” and of “very strong” mil­i­tary-to-mil­i­tary rela­tions, McCarthy told an audi­ence at the National Press Club in Washington, DC. “We have about 175 days to work through this diplo­mat­i­cal­ly. I think we can drive for­ward to an end state that will work out for all of us polit­i­cal­ly.”

The US and the Philippines are also bound by the Mutual Defense Treaty and the Enhanced Defense Cooperation Agreement, but ending the VFA would under­cut those and the legal stand­ing US forces have when in the Philippines.

The latter effect would endan­ger hun­dreds of mil­i­tary exer­cis­es and other mil­i­tary coop­er­a­tion. US Special Forces troops have been sta­tioned in the Philippines to help fight ISIS-linked mil­i­tants, and the US mil­i­tary has trained there with other coun­tries in the region. The Philippines has also hosted US troops deployed as part of Pacific Pathways, which is meant to allow US and forces in the region to build stronger part­ner­ships and readi­ness.

Asked about the effect of the VFA with­draw­al on US basing and train­ing, McCarthy said Friday that “con­ver­sa­tions are under­way” par­tic­u­lar­ly among the White House and State Department.

“The VFA, by chang­ing that would change basi­cal­ly the free­doms that you have to do the train­ing,” McCarthy said, “but this is a very close ally, and we would work through that, but it’s basi­cal­ly [chang­ing] the pro­to­cols of how you would work togeth­er if it actu­al­ly goes through.” 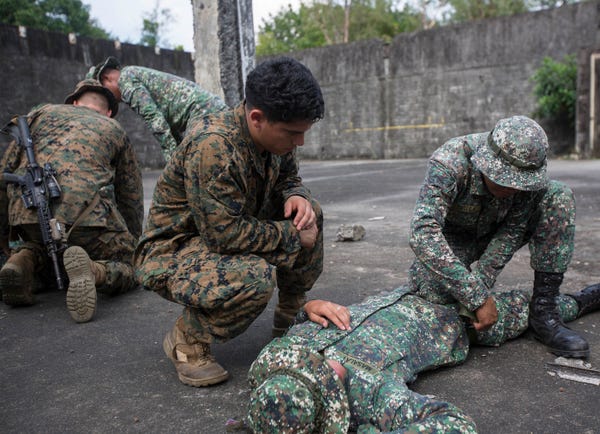 There a number of rea­sons the VFA may ulti­mate­ly sur­vive. Philippine mil­i­tary and secu­ri­ty forces value the rela­tion­ship, under which they receive mil­i­tary assis­tance, train­ing, edu­ca­tion, and weapons.

Philippine offi­cials have sug­gest­ed a need to review the VFA “to address matters of sovereignty” but have stopped short of advo­cat­ing with­draw­al. Duterte’s for­eign sec­re­tary also indi­cat­ed on Tuesday that the announce­ment should be seen as a jump­ing-off point for such nego­ti­a­tions, saying “other reac­tions have been idi­ot­ic.”

But it’s not the first time the Philippines has pulled out of this kind of deal. In 1991, it did not renew a mutual basing agree­ment, lead­ing to the clo­sure of Naval Base Subic Bay, the largest US base in the Pacific, and the with­draw­al of US forces.

Manila “quick­ly dis­cov­ered that after it did that it was ren­dered large­ly defense­less with its lim­it­ed mil­i­tary capa­bil­i­ties, and China actu­al­ly start­ed taking very bold actions in the South China Sea, includ­ing the occu­pa­tion of the Mischief Reef,” Prashanth Parameswaran, a senior editor at The Diplomat, said on The Diplomat podcast.

“We’re now left in a sit­u­a­tion where we’re not just hypo­thet­i­cal­ly talk­ing about what might happen,” Parameswaran added. “We actu­al­ly have a his­tor­i­cal record about what hap­pens when the alliance goes through peri­ods like this.”

Duterte has won concessions on other issues by push­ing on Washington, Parameswaran said, call­ing a sim­i­lar out­come this time the “opti­mistic sce­nario,” but in light of the impul­sive­ness of both Duterte and Trump, there remains “an ele­ment of risk.”

Agreements like the VFA take time to nego­ti­ate and ratify — after ending the basing agree­ment in 1991, the two coun­tries weren’t able to estab­lish the VFA until 1998 — and other coun­tries in the region, like Australia and Japan, can’t replace US mil­i­tary assis­tance to the Philippines, leav­ing Manila weaker in the face of Chinese ambi­tions.

“That is the big, wor­ry­ing sce­nario about Day 181,” Parameswaran said, “because the Philippine mil­i­tary, it’s build­ing up in terms of its capa­bil­i­ties, but it’s still one of the weak­est mil­i­taries in the Asia-Pacific, and that’s going to be laid bare on Day 181 if this does­n’t get sorted out.”