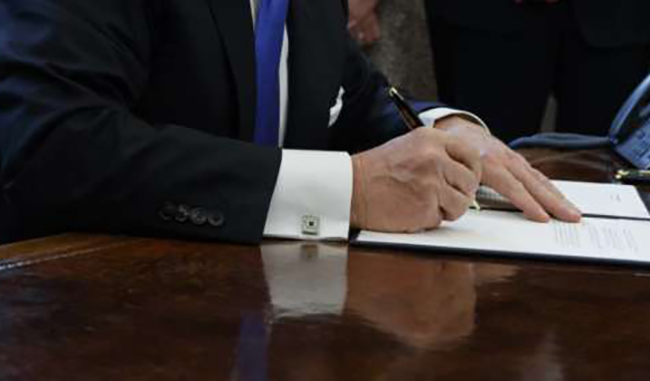 Recent press coverage says President-Elect Joe Biden plans to cancel a number of President Donald Trump’s executive orders. Given the critical role the nation’s 2 million civil servants play, these five executive orders should be high on the list to be canceled immediately:

Let’s go through them individually and look at what they do, why they should be eliminated, and some of the complications in eliminating them.

I have written extensively about this EO (here, here and here). It creates a potentially large number of quasi-political jobs, removes most civil service protections from them, and could devastate the merit-based civil service. There is not time before Jan. 20, 2021, to fully implement it, but there is ample time to do significant damage. The damage, including the largest scale “burrowing in” of political appointees that we have ever seen, new politically motivated hires, and conversion of hundreds or thousands of career civil servants to Schedule F, is where the complexity lies. Eliminating the EO does not eliminate the burrowing in and other actions that may have been taken.

Depending on the timing, it may be possible to simply cancel the personnel actions that move career employees and Schedule C politicals to Schedule F. Another option is to terminate the employment of the burrowed in Schedule Cs, but that could open the Biden administration to allegations of prohibited personnel practices based on political affiliation. Another clean option is to eliminate every Schedule F position and conduct a reduction in force (RIF). Because the converted politicals and new hires would have no place to go in a RIF, they would all be separated. Former career employees who are involuntarily moved to Schedule F or who have been converted and then terminated can easily be reinstated as career employees.

I am also hearing a few people saying that the Biden administration should retain Schedule F because it would give them hiring flexibilities. I strongly disagree. That view is roughly equivalent to being lured by the dark side of the force. While there may be a few benefits that could result, the overall result of Schedule F is politicization of the civil service. Politicization is bad, a spoils system is bad, and a non-merit civil service is bad, whether it is done by Republicans or Democrats. This EO opens doors that must be closed and it must be rescinded immediately.

This EO, widely viewed as a hyperpartisan appeal to President Donald Trump’s base, eliminates diversity and inclusion training in the federal government (civilian and military) and by federal contractors. It denies the realities of systemic racism, using inflammatory language and, ironically, stereotyping the views of proponents of diversity and inclusion training. It interferes with the ability of agencies and contractors to promote diversity and inclusion. Given the substantial research that demonstrates the benefits of a diverse workplace and the measurable effects of systemic racism, this EO is a significant step backwards. It should be rescinded and any actions taken to implement it reversed.

This EO was described as an attempt to hold federal workers more accountable. It reduced the time for employees with performance deficiencies to improve, eliminated the requirement for progressive discipline, shortened the times for agencies to make decisions on adverse actions, attempted to remove discipline and performance from grievance procedures, and eliminated “clean record” settlements. While the goal of streamlining discipline and performance cases is sound, the approach is not. It focused on speed and removing employees’ ability to respond or to grieve. Combined with the administration’s failure to ensure a quorum on the Merit Systems Protection Board, it significantly limits employees’ ability to have an independent third-party review.

The reality is that the government wins most of those reviews, so they are not the problem. The real driver of delays in dealing with poor performance and misconduct is management inaction. Many supervisors do not want to deal with such issues, and many HR and General Counsel staff want to settle everything. Rather than dealing directly with real problems on the management side, this EO went after the employees. It should be rescinded.

This EO was targeted directly at the ability of unions to adequately represent bargaining unit employees. Labeling official time as “taxpayer funded union time” makes it sound as though the unions are being paid to do union work. That is not the case. Official time is necessary because federal agencies are not closed shops and the unions are required to represent bargaining unit employees whether they pay dues or not. This EO placed unreasonable limits on the amount of official time, directed agencies to remove unions from offices in agency space, and remove resources such as computers. The EO, issued at the same time as EO 13839, removed much of unions’ ability to represent employees at the same time 13839 reduced the amount of time for employees to defend themselves. This coordinated effort to deprive employees of due process was a rather cynical approach to dealing with employee issues and should be rescinded.

This EO was a clear assault on the rights of federal workers to organize and bargain collectively. It set arbitrary limits on the time needed to negotiate ground rules and contracts themselves, assumes that delays in bargaining are the fault of the union, and bans interest-based bargaining, prohibits bargaining permissive subjects described in 5 USC 7106(b) (1). Combined with EO 13837, this EO was an attempt to limit the ability of unions to adequately represent employees and to truly negotiate contracts. For those reasons, it should be rescinded.

My suggestion to rescind these EOs does not mean I think everything is great and no reforms are necessary. To the contrary, civil service laws, regulations and policies are woefully out of date. Substantial reform is needed to bring them into the 21st century. While much of that reform can be done administratively, there are changes that will require congressional action. To have any hope of making such changes and making them stick, the changes will require bipartisan support. Later this week I will post a proposal for a way forward for civil service reform.